SPID theatre was started in 1999 by writer Helena Thompson. She was joined in 2003 by director Rachel Grunwald. In 2005 they found a home for SPID; abandoned community rooms at the centre of Kensal House estate in West London. After some TLC, these “mouldy, flooded and boarded up” rooms soon became the estate’s local theatre space providing workshops and directing shows with local acting talent. SPID has it’s neighbourhood at it’s heart, and since taking residence at Kensal house, it has grown into something so integrally local – see SPID’s ‘vision’. Their popularity, variety and breadth of ventures seem to grow with each year. As part of it’s theatre by-and-for-the-community, SPID (which is also a registered charity) delivers a variety of workshops to young people up to the age of 25, and continues to produce new and engaging performances showcasing impressive writing and acting talent. It’s most recent local project was ‘Kensal Voices’, in collaboration with the Victoria and Albert Museum and the Twentieth Century Society which involved young people taking part in workshops of their choice spanning journalism, design, multimedia, film, drama, music and architecture with professionals in these industries. These workshops were all geared towards exploring the history of the Kensal House council estate and it’s residents.

Excitingly, SPID theatre has recently won the £50,000 Clore prize to develop their youth and heritage work. The prize will fund their next local project which will focus on the eye-catching Trellick tower and it’s residents in West London. To find out more watch this video.

SPID theatre are inclusive in more ways than working with talent in the local area. Their shows demand audience participation. Whether it’s by sneaking around behind characters in “Open House”, playing games in a park in “Childsplay”, or taking control of a human in their most recent production “iAm”, SPID doesn’t give the audience a chance to sit back and relax, but uses them as an integral part of their shows. This October iAm was back on stage after touring the show in 2013.

Humans and technology. The theme of iAm is certainly not a new one, but I was intrigued as to how they would turn it into an immersive piece of site specific theatre at Kensal House. iAm forced the audience to explore their relationship with technology by giving them a platform on which to interact and build a relationship with iAms, which were essentially robots in human form, or in the company’s words “discarded humans unable to form independent thought”.

The show began with the audience being asked to sit in a cosy waiting area with free wine to hand. After individually assessing our morals in tiny rooms using multiple choice questions, a company representative separated us into three groups based on our answers and led us into a large hall. We introduced ourselves to each other in the group, and then the iAm project was explained to us. We were all there as part of a focus group to give our feedback on the “products”. The products then entered the room. Three blank faces walked in and stood still, facing us.

Each group was given an iAm. We then named, dressed and chose an accent for each of the iAms, using a simple command. We learnt to use our iAms, firstly by getting them to perform silly tasks of our choice. Amongst them were yoga poses, street dancing, and kissing the other iAms. Then a competent element was added, and the iAms competed against one another in three games which made the teams bond with their iAms. It quickly became obvious how important language is when someone listens to something exactly-as-you-say-it. These human iPads were unable to infer and had to be taken through each step of their actions. This culminated into a fiercely hilarious competition between the teams.

At the end of the show the teams were asked to reset their iAms so that they would go back to how they were at the start of the show; fresh out the box. Two of the three groups refused. The company representative said this was because the teams had grown an emotional attachment to their iAms. This was the obvious message of the piece all along, but presented in a sly, fun and self-exploratory style. The iAms were merely reflections of our commands; machines with human substance, meaning, and affection inserted.

iAm held up a mirror to our culture’s excessive emotional attachments to digital media, much like the Tv programme Black Mirror did. But unlike Charlie Brooker’s mini-series, iAm echoes this with a bit more tongue-in-cheek, making it accessible to all ages. The iAm actors’ ability to stay in character was flawless.This playful, participatory piece truly forces the public to face their attachment with the digital world using three very talented and commendable actors as the stars of the show. 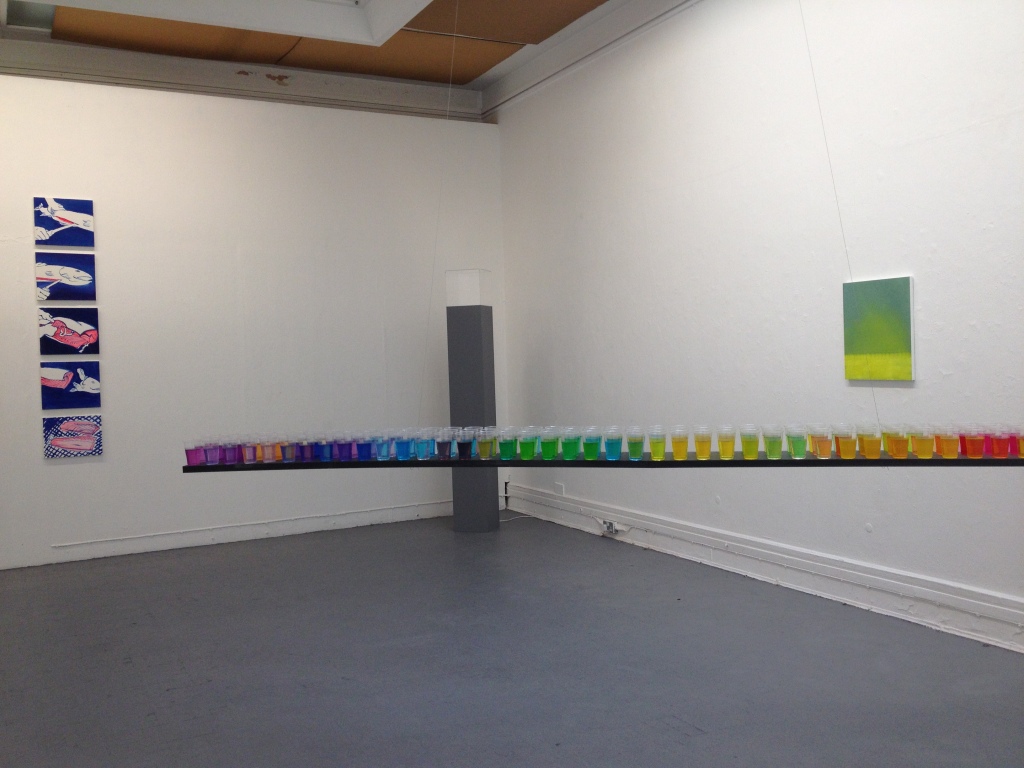 Paintings, penguins, and nudity. This year’s Slade School of Fine Art MA/MFA Interim Show hosted a range of colourful and diverse pieces of artwork within freshly painted white walls in the Slade Research centre.
Immediately eye-catching was the liquid colour spectrum, suspended on a shelf in a neat line of cups in the first room. This graduating sequence of the colour wheel was reminiscent of GCSE art classes, and possibly the work of an art teacher’s star pupil. It was refreshing to see something that is used so much in art teaching being put into a new context.
One very striking piece of artwork in a following room was a collection of numerous baring teeth painted onto a backdrop of bloodied red pieces of wood. The sharp, geometric lines of the wood and the green rods onto which they were suspended filled the space from floor to ceiling which made this artwork all the more imposing and visceral.

A popular medium in this exhibition was painting. Much of it was on paper, scattered on the walls in each room without explanation. Some paintings were colourful, showing human, animal and organic forms from nature. Others were grey, and displayed hard lines and man-made shapes. One distinctive piece was a painting which looked much like a room filled with glass shelves or boxes, or ghosts of past furniture. This painting seemed to reflect somewhere dark and vacant, perhaps somewhere in the artist’s mind, and was oddly captivating. As well as the more abstract paintings, there were paintings which depicted more concrete objects such as grey hanging scrolls, and a colourful narrative sequence depicting the different stages in the gutting of a fish.
Some very abstract 3D and 4D pieces in the collection which left very little impact on me as a viewer included stacks of empty Evian and Volvic boxes. They stood high in the middle of the room, seemingly unsure of the statement they were making. There was also an installation featuring two old television screens, and a projector on a loop. The moving images were blurred and there were indistinguishable sounds playing in the background. Another piece was a green square of light projected onto a wall with a black cloth hanging in front of it. Perhaps with some explanation to go with these, they could have made more of an impression.
A distinctive piece of 3D work was that of a coffin, on which a photograph of a naked woman was mounted- posing and de-limbed like an ageing greek sculpture – holding a decapitated head in front of her lady part, with blood dripping down her legs. This seemed very personal, an almost feminist piece, and something that might be found in a contemporary gallery space amongst other professional artists’ work. Another high quality piece in this exhibition was Robin K’s black and white pixelated human figures scattered on the wall in a corridor, and a large policeman. These had been delicately pieced together, pixel by pixel, and showed painstaking attention to detail.
One piece in the exhibition which unexpectedly stopped me in my tracks was a homemade DIY version of the childhood game “Penguin Race” – the one where a line of penguins hop up some steps, then skate down a curved slide to the bottom of the stairs to start the process all over again. This piece was crudely made, with the wooden stairs left unpainted, and the battery pack covered in aluminium foil. What made this piece hypnotic was the image and monotony of the single file of penguins and the loud, mechanical and robotic sound of each penguin moving upward. Intentionally or not, another student’s light projection cast a shadow of the penguin race piece which loomed curves onto the wall opposite, adding another dimension to the artwork.
Overall, Slade’s interim fine art show demonstrated a lot of potential. Some pieces could have been explained more, or given more space and not cluttered into one room, but due to the colour and diversity of all the pieces, I won’t be surprised to see some of the names popping up in Fine Art galleries soon after graduation. ​ 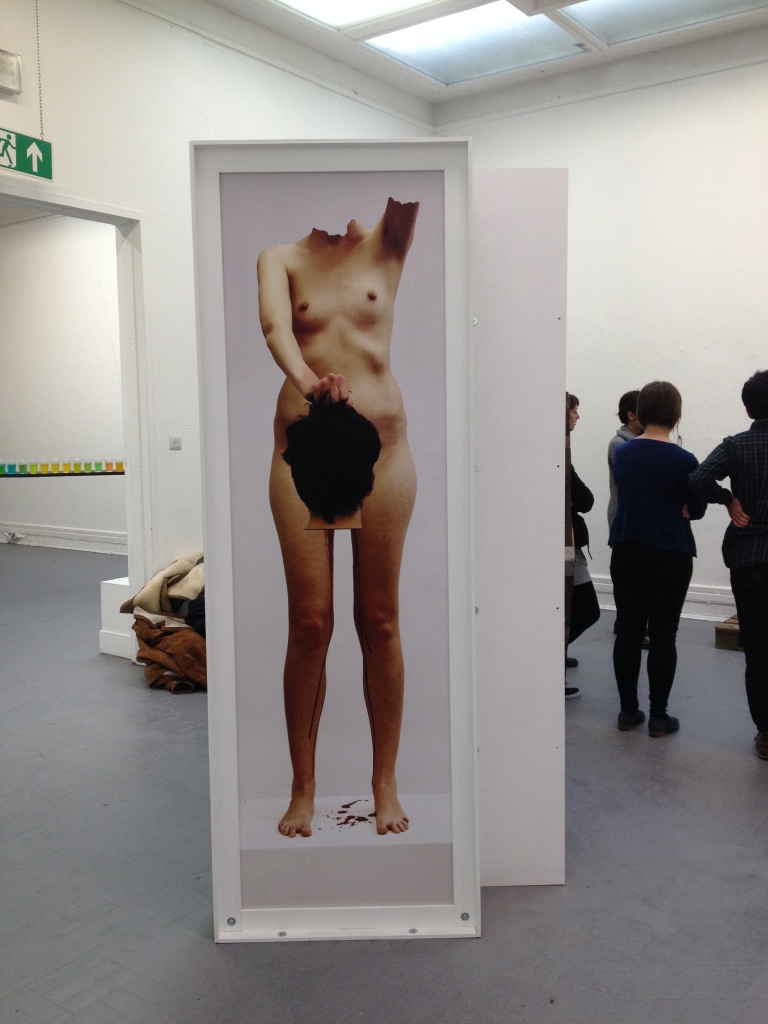